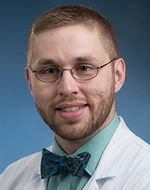 Dr. Morse received his bachelor's degree in chemistry, with a minor in music, from Milligan College in Elizabethton, Tenn., and his medical degree from Edward Via College of Osteopathic Medicine in Blacksburg, Va. He completed his family medicine residency with the Fort Wayne Medical Education Program in 2016. While in residency, he earned a certificate of advanced obstetrics qualification.

Many of his hobbies revolve around music including piano, guitar, acapella and barbershop singing, composition and arranging. Dr. Morse is also passionate about reaching underserved patient populations, something he demonstrated as a medical student during two different medical missions to Honduras and through his involvement with Appalachian Outreach in Virginia. He is fluent in Spanish.